“North Hollywood” is Streaming On Demand.

A few years from now, my kid will graduate from high school. Before that happens, he’ll live in a world where his primary focus is getting good grades in school and spending enormous amounts of time online with his friends. The vast majority of decisions regarding his well-being are made by either his mother or me.

Once graduation happens, he’ll enter a world that’s sometimes hostile and frequently irrational. He’ll have to take on the load of higher education, decide what his potential career path will be, juggle relationships, and accept or ignore advice from his clearly well-meaning and clearly clueless parents.

He’ll feel like he barely knows what in hell is going on, and he’ll be confronted by older people who act like they have all the answers. What those people won’t tell him is that nobody has all the answers. Take a look at the most dogmatic Boomer, one who’s convinced that These Kids Today Just Don’t Understand, and you’ll see a person who took the first tottering steps into adulthood and thought to themselves, “Please, God, don’t let me screw this up.” 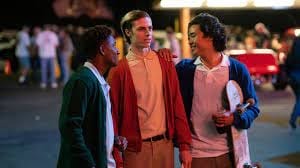 We all screw up. We all feel adrift. That fundamentally human experience is why we have coming of age films, because we can all relate to them. The more specific the film, the easier it is to empathize with it. That’s why, despite having exactly zero interest in skateboarding, I was so taken with the new film North Hollywood.

It won’t be long before Mikey (Ryder McLaughlin) graduates from high school. He knows, in the perceptive yet inarticulate way of teenage boys, that things will change. Mikey’s dad Oliver (Vince Vaughn) has been busting his ass in construction for years, trying to do everything possible so that his boy can go to college, move out of their little ranch house in North Hollywood, and make something of himself.

And therein lies the rub. Mikey is a smart kid, yet he doesn’t see himself as a hitting-the-books kind of guy. Nor is he interested in following in his old man’s footsteps and getting into construction. In the way that only teenagers and the severely mentally ill can pull off, Mikey has an absolute certainty of where his path lies.

That passion will cause him to reconsider his friendships with Adolf (Aramis Hudson) and Jay (Nico Haraga), friendships that have endured since elementary school. He’ll stumble into the world of skating professionals and stumble into his first romance with Rachel (Miranda Cosgrove), a young woman clearly on the path to success. He’ll deal with pressure from his father and try to figure out exactly what it all means. Just like the rest of us.

One of the great things about movies is specificity. The idea that, for a film to work, it needed to be made by a certain person with a certain point of view. North Hollywood is the feature debut of Mikey Alfred. He’s made a few shorts and made a name for himself as the founder of professional skate group Illegal Civilization. Alfred also had an association with legendary producer Robert Evans, and all of those influences came together to make a movie that only he could have made.

As a director, Alfred embraces an aesthetic that’s partially nostalgic and partially referential.* He’s made a 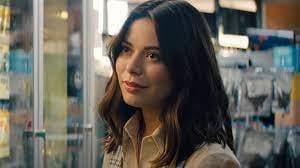 drop-dead gorgeous film, one where the skater kids chat up the ladies they have their eyes on and do it at an old school drive-in wearing old school cardigans.** There are multiple scenes of McLaughlin and other actors skating, without the benefit of stuntpeople, and doing so to 1960s doo-wop. There isn’t strict adherence to realism in the feel of the film, which creates a somewhat dreamlike feel.

One of the old cliches is to write what you know. Alfred took that to heart with his screenplay, as he grew up in the area with a single dad who worked in construction. He knew what it was like to know deep down in your bones what you’re meant to do with your life, and how it feels when someone correctly points out that you can work hard for a dream and still not attain it. Alfred is also one of those writers who can accurately portray what teen male friendships sound like without it coming off as condescending. Speaking as a former teen, I remember that huge percentages of conversations with my friends consisted of roasting each other. And yet, sometimes it was done in affection, in hostility, in fear, and sometimes just because it was Thursday. Listen to his characters talk, and you’ll hear honesty and a thrumming energy within their lack of articulation. 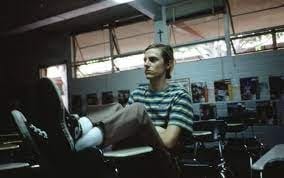 The cast is an eclectic blend of relative newcomers and old pros, and overall they bring to life characters that feel fully fleshed-out. As Mikey, Ryder McLaughlin carries the film with humor and intelligence. His performance is charismatic and honest, and he’s not afraid to portray Mikey as someone who’s a little selfish and who makes some dopey decisions. On the other end of things is Vince Vaughn, who’s well into the second act of his career as a genuinely interesting character actor. Vaughn understands the down to earth aspects of his character, and as a father of two, he also knows the unpredictability that’s part of being a parent. He uses that experience to show us a dad that’s old-school down to his bones, genuinely concerned his son is making poor choices, and smart enough to let Mikey make his own mistakes.

Whether it’s been a few years or a few decades since you’ve clawed your way out of adolescence, North Hollywood is the kind of movie that has the power to bring those days roaring back. I think, as time goes on and this film has a chance to age, it’ll be regarded as a classic in the coming of age genre. This is a film you should not sleep on.

*Considering that Gen Z has been surrounded by media their entire lives, it only makes sense that they would make media that comments on itself.

**There’s even a scene where Vince Vaughn’s character gives his son a hard time for wearing a sweater with shorts.

Tim Brennan
Tim has been alarmingly enthusiastic about movies ever since childhood. He grew up in Boulder and, foolishly, left Colorado to study Communications in Washington State. Making matters worse, he moved to Connecticut after meeting his too-good-for-him wife. Drawn by the Rockies and a mild climate, he triumphantly returned and settled down back in Boulder County. He's written numerous screenplays, loves hiking, and embarrassed himself in front of Samuel L. Jackson. True story.
Tagged: Movie ReviewOn Demand
OnBillings.com is a directory and information guide for Billings, Montana.
Discover the best of Billings shopping, restaurants, night life, breweries, events, business, outdoors, fun, local life, real estate, transportation, jobs, and schools.
Looking for what to do in Billings? OnBillings.com has columnists, and bloggers to keep you up to date on the best of Billings, Montana.